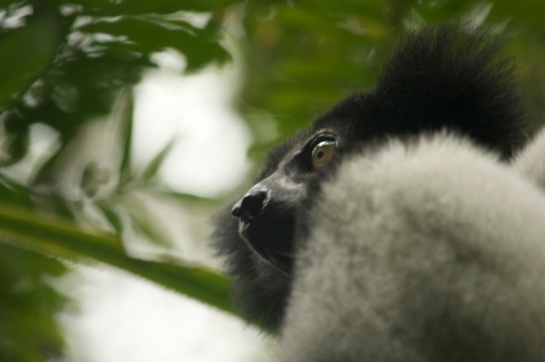 Of the many animals you’ve ever seen or heard in a zoo, you would never forget the Indri. If you could find one in a zoo, that is. They do not survive in captivity and are critically endangered with population numbers estimated to be well under 10,000, possibly as low as 1,000.

We were fortunate to see and hear a handful of these magnificent creatures (largest of the living lemur species) in the Andasibe-Mantadia National Park. I did not succeed in getting a very good recording of their beautiful, haunting voices, so I’ll link you to a Youtube video posted by Tribes Travel. Just click on the Malagasy name for the Indri, Babakoto, and you’ll be whisked away to the Madagascar rain forest (for a couple minutes anyway).

But today, I wonder how many of those voices have been silenced in the intervening months. This February, Madagascar authorities arrested Jean Yves Ratovoso, one of the leading wildlife officials whose duty it was to protect the Indri. They also seized the carcasses of 11 dead lemurs (10 Indri, 1 Diademed Sifaka). From the description of the location, I don’t believe it was in the exact same part of Andasibe we were in, but was nearby. Our guides names were Jacque and William, so likely we never met Jean Yves Ratovoso.

I could sit here in the safety and comfort of my middle-class American existence, and denounce Ratovoso via my keyboard. But can I ever understand what he did? Poverty is rampant in Madagascar, even for those who earn a relatively reliable income from the tourism trade. Their resources are dwindling. Their society is changing, Fady (taboos) against killing or eating lemurs are no longer the deterrent they once were. Organized crime is there. And so, too, are foreigners willing to pay for a chance to eat a “forbidden” delicacy. As the natural habitats suitable for each species of lemurs are increasingly fragmented and encroached upon, their population decreases and their voices fade away. And even those who are sworn to protect them will violate that trust.

If you’re thinking of visiting Madagascar to see the lemurs, you should go soon, before the call of the Babakoto is only a fading echo.