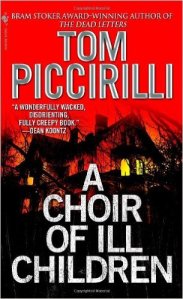 Yesterday, the fans of dark genre fiction lost a huge, talented voice when Tom Piccirilli passed away from brain cancer.

Like most of the horror authors I read, I never had the chance to meet him, but other authors (Brian Keene, Jeff Strand, et al) have remarked on what a kind, generous man he was. He was especially known for his encouragement of new writers and for his breadth of work. While he started out in horror, he branched out into dark fantasy, crime dramas, mysteries, and even westerns – sometimes mixing genres (always with dark themes). He won the Bram Stoker award four times.

Piccirilli’s list of works is extensive, but so far I’ve only read four: November Mourns, Headstone City, The Dead Letters, and A Choir of Ill Children. The latter is cited as a classic example of southern gothic horror and is my favorite. Like much of his work, it relies heavily on themes of loss, family, and secrets. Some readers may find his depiction of severely physically-deformed individuals disturbing, but Piccirilli uses such imagery to reveal the ugliness of the human soul. I once read in an interview that Piccirilli himself did not quite understand why he often featured children who did not fit society’s definition of “normal.”

I first encountered Piccirilli in a book review section of “Talebones” – a quarterly horror/dark fantasy magazine that ran for several years in the late 1990’s and early 2000’s. If my memory is correct it was a review of A Choir of Ill Children. So I’d like to thank “Talebones” editor Patrick Swenson for introducing me to him and his work. While there will be no new works forthcoming, I look forward to catching up on Piccirilli’s other works.

Condolences to his wife, Michelle.

The dazed, glassy-eyed expression; the shuffling, rambling walk; the moaning. Sound familiar?  Yeah, Zombies. It also looks and sounds a lot like me in the throes of a migraine. I’m sure I’m not the only one.

But I’m not sure if it’s a coincidence that my interest in (dare I say fondness for) zombies happened to coincide with an increase in the frequency of my migraines. It also coincided with a resurgence in the zombie sub-genre of horror fiction. And thank goodness for that. I’d been waiting for the vampire sub-genre to die off and be replaced with something better (no offense to vampire lovers). How on earth can anyone who’s as pale as a frigging corpse be considered sexy?? Yuck!

Instead I sometimes find myself a prisoner of my brain, the pain the center of my universe as it stabs through my head, radiating through one side or the other. It can even feel like it’s pulling my head apart, sometimes the left from the right, sometimes the top from the bottom. I can still remember my doctor’s expression when I described the pain as feeling like someone trying to saw off the top of my head (at the eyebrow level) with a semi-sharp spoon. He was probably thinking ‘brain tumor’ but didn’t say it, just sent me for a cat scan. (I hear Arnold Schwarzenegger saying “It’s not a tumor.”) Or lately, the pain is more likely to feel like it’s pulling one side of my face down, creating a bizarre numbness. I find myself poking my cheek, testing its sensitivity. I’ve even found myself in front of a mirror, checking out my face and doing the FAST Test (sometimes referred to as the Smile Test) to see if I’m having a stroke. BTW, those are symptoms everyone should know just in case you really are having a stroke.

or reading zombie fiction, like Brian Keene’s “The Rising,”

I find myself picturing zombies as prisoners to their brains – the only body part still functioning, its errant and erratic signals jerking legs and arms into that shambling gait, pulling them ever forward in search for human flesh to consume. I find myself sympathizing with them, wondering if they’re just suffering from a really bad migraine. Maybe we could give them some medication instead of shooting them in the head? I know it makes me feel less of a zombie (after making me feel more like one for a while).

In the meantime, I don’t crave human flesh. Just a dark, quiet place to rest while my brain lives in its own zombie world, concocting new zombie ideas. (Soon to be found in the forthcoming second edition of my “Zombies and Aliens” 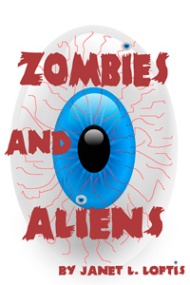 e-book collection on Amazon Kindle.) And some new zombie fiction from other authors to read. Any suggestions? What are your favorites?