Two or three years ago, in the “Reader’s Digest” magazine, there was a letter to the editor, accompanied by a photo from Machu Picchu (Peru), from a reader suggesting a new way for travelers to document their journeys: taking photos of their feet.

New? Hmmmm. No disrespect to the letter writer, who inferred that this was an innovative technique which he and his family had created and wanted to share with the world, but it’s hardly new. I’ve been taking pictures of my feet since sometime in the early 1980s. I’m not claiming to have invented the idea either, but I do have a picture just like the one they published in “Reader’s Digest” that was taken in approximately the same spot about a decade earlier than theirs.

It started in a moment of spontaneous silliness. Sitting on the beach in Santa Cruz, California, I pulled off my shoes and dug my toes into the sand, seeking the warmth trapped below the surface. I then placed my shoes – new pink and white Nikes – in front of me and snapped a photo of them with the waves crashing onto shore as a backdrop. Okay, that technically doesn’t qualify as taking a picture of my feet since they weren’t in the shoes at the time, but that quickly led to a new trend.

A few months later at Disneyland, sitting on the Thunder Mountain Railroad roller coaster, I slid my foot next to my cousin’s and snapped a picture of our two feet while waiting for the ride to start. That was only the beginning.

I have pictures of my feet everywhere: at home (which usually include a cat or two who are sleeping on them) and around the world: Norway, Zanzibar, Argentina, British Columbia, Antarctica, Iceland, Dubai, etc. I have pictures on beaches, glaciers, and man-made structures. I have pictures of my feet in places where it was probably a bit disrespectful: standing on top of Hadrian’s Wall in England, propped up against the Great Pyramid in Giza, Egypt. I tried to take a picture of my feet on a bench in the British Museum (London), but got yelled at by a matronly white-haired docent with a sharp accent and even sharper tongue. I have pictures of my feet alongside relatives and friends at any number of places from a nameless lake up in the Sierra Nevada to a park trail in Bandelier National Monument. The friends and relatives think I’m a bit crazy, but they go along with my urging to “hey, put your foot there!” I even have one friend who, when now viewing any of my vacation photos, always first asks “Where’s the foot pictures?”

Do I have a foot fetish? No, I don’t think so. Feet, mine or other people’s, don’t fascinate me. I don’t run around in my daily life snapping foot pictures in ordinary circumstances. I don’t take pictures of strangers’ feet like some crazed stalker.

Like the letter writer in “Reader’s Digest” I came to discover what a unique way the foot photos were to document my travel, to say “Janet was here.”

All of my photo albums (traditional or electronic) have at least one foot picture. My Antarctica photo book even includes pictures of penguin feet (I thought that was a nice counterpart to pair with mine), and even a couple footprints in the snow. As eco-travelers like to say (and this might be a National Geographic slogan, but I’m not certain): “Take only memories, leave only footprints.”

I will eventually be making a photo album containing only my feet pictures, but I’ve got two more continents to go first (Asia and Australia). I envision using a global map and placing a foot photo on each country my feet have touched. My journey. My footprints.

Do you take pictures of your feet? Dog owners – do you take pictures of your foot next to your dog’s paw? It’s an ordinary thing, walking the dog every day, but did you ever think to memorialize it for later? Parents – you have tons of photos of your kids, but of their feet? Their foot next to yours, say once a year, as their foot grows in comparison? Take note of where your feet have been and whose paths they have crossed.

The question which comes up most frequently when traveling is “why?” Why do you do it?  What – or who – gave you the “travel bug?” 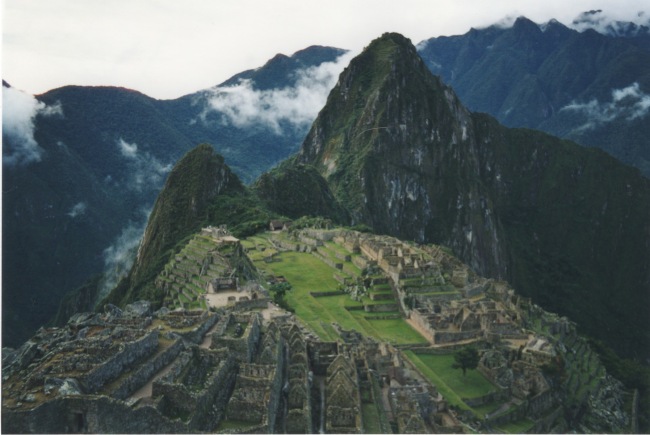 Sure, my parents took us on road trips – a tradition for many families in the 1970s it seems – to places like Mount Rushmore or the Worlds of Fun amusement park in Kansas City, but that wasn’t it. While I have fond memories of those journeys, none of them made me think “wow, I want to do this some more.”

Maybe I was too young, or maybe sharing bonding moments with my siblings was more important.  As always, it is the small moments from those days which stick in my memory: riding giant tortoises at some so-called “zoo” in South Dakota, stopping in the middle of the Badlands – just pulling off the road – so we could use the strange rock formations as slides (I ruined a pair of pants); my brother accidentally knocking my eyeglasses off my face at the top of the roller coaster (instead of ending a couple hundred feet down, they miraculously landed in the lap of the person seated behind us).

So what was it that infected me with wanderlust? It was another small moment: the arrival of the U.S. mail. It was sometime in the late 1970s, and my father’s latest issue of “National Geographic” had arrived and there, in full color glory on the cover, was Machu Picchu, the Inca citadel in Peru, re-discovered by explorer Hiram Bingham in 1911. I said to myself “Cool! What’s that? Must go see!”

(I searched the internet for that magazine cover, only to repeatedly run afoul of National Geographic’s requirement that I sign up for a free account and let them post to my Facebook friends on my behalf. I don’t appreciate websites which force such things upon me, especially when I’m providing what amounts to free advertising on their behalf. Hear that Nat Geo?)

It took many years for me to eventually make my way to that Peruvian mountaintop and, yes, the catalyst of 9/11. Many people took that tragedy as a sign they should do those “one of these days” things they’d been postponing: get married, go back to school, take a dream vacation, etc. I was in the latter group. In the years preceding 9/11, I had received several brochures from Lindblad Expeditions advertising a cruise to the Galapagos Islands – with a side excursion to Machu Picchu. I would always toss out the old one, file away the new one, and say “one of these days.”

Soon after, it really was one of those days, and I was taking what everyone calls the ‘postcard picture’ of the Inca ruins with Huayna Picchu, its sister peak, in the background, similar to what graced the magazine cover back in the 1970s. It was everything I had hoped for, well, except for later dropping my camera two meters down the side of Huayna Picchu. The sound of breaking glass is not what you want to hear from your camera. (Thankfully, the film roll was safe in my pocket.) Here’s a tip: when you’re sitting on the top of a mountain, make sure you actually have the camera strap in your hand when you stand up.

You might say I didn’t quite follow the right path to Machu Picchu. After all, it wasn’t a National Geographic tour group. Lindblad, however, led my footsteps back in that direction when they formed a partnership with Nat Geo in 2004. So I came full circle without even trying. (No, I didn’t get to ride the giant tortoises in Galapagos. It’s illegal.) Although, I suppose to truly come full circle, I should invite my father to join me in a return to Machu Picchu – if he could ever be distracted away from Europe.  After all, it was his magazine subscription, so my catching the travel bug is all his fault.

Now I just have to figure out who infected me with the writing bug.