It wasn’t much of a dance on my part, more like a comical floundering. But the juvenile California Sea Lions were graceful acrobats, gliding and somersaulting through the water around me.

We were at Los Islotes, Sea of Cortez, where the National Geographic Sea Lion had dropped anchor for the chance to snorkel with its namesakes. It was mostly the youngsters who slipped into the water to check out their new playmates while the females and a few big bulls stayed on the rocks. (Los Islotes is a rookery, and thus protected, so no landfall is permitted.)

Like dogs, sea lions explore with their mouths, so there were plenty of nips on flippers and underwater cameras. Several snorkelers got “up close and personal” shots of the inside of the sea lions’ mouths with their Go Pros. I wasn’t one of those because all though I was armed with a Go Pro, I was still learning to use it and, admittedly, I wasn’t doing a good job at conquering my fear of the water. Putting my face in the water freaks me out, so it took several minutes for me to let go of the zodiac and only then because Jack Swenson (naturalist and photographer), who was manning the safety boat, distracted me with “Look, there’s a sea lion right there!”

That’s definitely what I needed. Plunge the face in, and be rewarded with a playful creature twisting its body around the rope which anchored the zodiac to a buoy, as he (or she?) alternated between chewing on the rope and poking its inquisitive nose toward my cabin mate Judy. (How appropriate is it that me, crazy cat lady, get assigned a cabin mate who’s a veterinarian?)

I spent several minutes, floating there, watching, marveling at this creature’s ease in the water, wishing that I was the same. After the sea lion grew bored with its game and swam away, I followed and found myself in the middle of a circus. Snorkelers and sea lions diving and twisting around one another in an underwater dance…or maybe an underwater fashion show where the sea lions are the models and the snorkelers the paparazzi.

Unfortunately, the Sea of Cortez is not as warm as you think it might be. Even with a shortie wetsuit on, I couldn’t spend much more time in the water before I was freezing, and had to retreat to a hot shower on board ship. (Thank you to Mary and Grace who made a “Janet sandwich” on the zodiac upon seeing how violently I was shivering during the ride back to the Sea Lion.)

We had many more encounters with playful sea lions during our two weeks in Baja – they loved to chase and dive under our zodiacs. I hope to play…to really dance…with them again in the future. 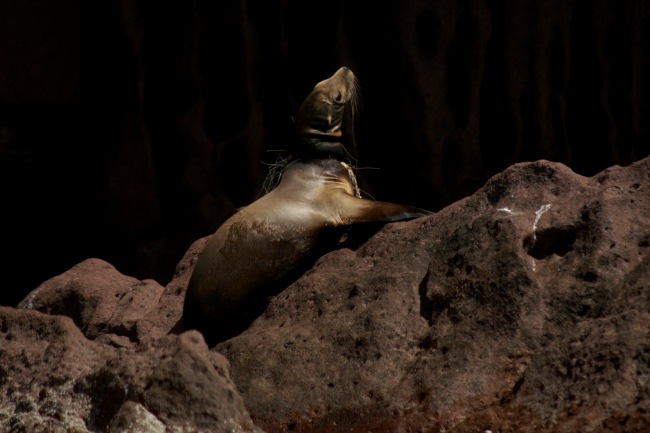 I just hope I won’t see many more of them with fishing line tangled around their necks.

Given humanities’ often violent history with whales, it can be difficult to understand why whales would want anything at all to do with us.

But in Laguna San Ignacio, on the Pacific coast of Mexico’s Baja Peninsula, not only are the whales friendly, they’re trusting and curious. Which is especially impressive considering the lagoon is one of the key nurseries for the Gray Whale, and it is believed that some of the whales who return here every year to spend the winter may be old enough to remember being hunted.

Yet, as we float in our zodiacs, cameras held ready, the whales slowly circle their way around, deciding if they’re going to check us out. Mothers gently nudge their month-old calves toward us; other calves approach us on their own, though mother is never far behind. They spy hop, drop back under the gentle waves, spy hop again. Soon they are within touching distance and cameras are largely forgotten as we reach out to touch them, to pet them. They seem to like it, rubbing against the boat, even pushing the boat around like it was a bathtub toy. They return again and again, circling the boat, diving under it, rolling on their side to turn an eye up to look at us. 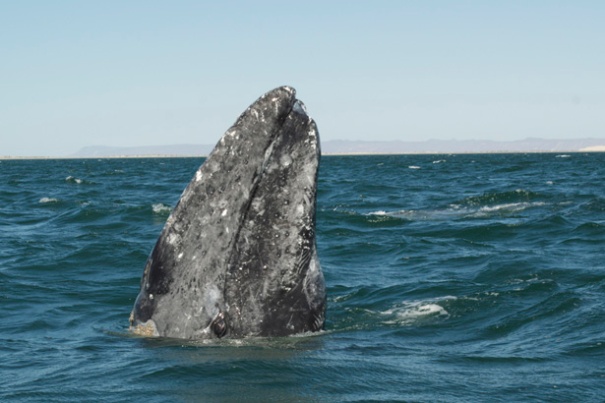 Their skin feels like a wet, somewhat overripe eggplant (except where they are covered by barnacles which feel while a really rough stucco wall). And they taste very salty. Yes, I kissed the whale! (Three times) At one point I was leaning so far out of the zodiac, one of the other tourists grabbed hold of my feet to keep me from falling out.

Our pangero, the fisherman who guided the expedition, said our visitor had not been named yet, so we decided to call her “Berta” (could be “Bert” of course – who can tell?) Berta spent quite some time with us, entertaining us, seeming to revel in the touch of human hands. Could she hear our laughter and delighted squeals? I think so. And I think she was having fun too. All of the calves were – one of the other zodiacs had two calves pushing each other out of the way to get to the people. I imagine Berta was laughing herself when she rose one last time and with a “spouf” of breath, sneezed all over me from her blowhole.

Two weeks later, it’s almost like my trip was a dream, but I will never forget Berta’s eyes. And I hope that Berta will never forget the human ambassadors who came to visit her birthplace and that, in time, Berta will be nudging her own calf toward a hopeful boat full of people who dream of simply touching a whale. Or getting sneezed on by one.